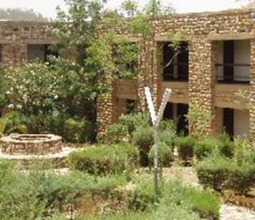 Axum is the home of the famous Stele Field, believed to have been carved in the 4th century AD.

On a hill overlooking the town, Yeha Hotel has 63 en-suite rooms, all equipped with TV and desk. The restaurant serves Ethiopian and some international dishes, and the bar has a selection of beers, wines and spirits. Meals and drinks can also be served on the attractive terrace.

Highlights of Axum include the Archaeological Museum of Axum, and the Cathedral of St Mary of Zion, believed to be the last resting place of the original Ark of the Covenant; the famous Stele Field, believed to have been carved in the 4th century AD by subjects of the Kingdom of Aksum, or Axum, and grave markers for royal burial chambers. The largest of the stelae was taken to Rome in 1937, during the Italian occupation of Ethiopia, and the monument was only re-erected in its original home in Axum in 2008.

Also of interest here are the palace and tomb of King Kaleb and King Gebre Meskel, and the residence of the legendary Queen of Sheba, who is said to have returned from her visit to King Solomon of Israel carrying his child: Menelik, founder of the Solomon dynasty of Ethiopia.

To find out more, or request a quotation, add Yeha Hotel, Axum, to your list of favourites.

Accommodation In The Northern Area