Near the statue of Ras Mekonnen, father of famed Emperor Haile Selassie, Winta Hotel is well situated for the walled city of Harar.

The 30 en-suite rooms are equipped with TV and fridge, and some have balconies with views of the old town. The restaurant serves a selection of Ethiopian and international dishes, and has a bar serving local and imported drinks.

The walled city of Harar was founded by Sheik Aba Dir, who came from Arabia in the 10th century, bringing the ways of Islam. Despite being the youngest of the 43 holy men who came, he was recognised as their leader because of his spirituality and the many miracles he performed. This lovely walled city has no cars in its cobbled alleys, and is home to 110 mosques and a surfeit of shrines. Places of interest include the bustling market, the traditional houses and several museums. The first non-Muslim to visit was the explorer Richard Burton in the 19th century; the French poet Arthur Rimbaud made the town his home in the mid-20th century.

Outside the city walls, a tradition of feeding meat to spotted hyenas has been established, in which visitors are welcome to participate. Notable exports of Harar are coffee and beer.

To find out more, or request a quotation, add Winta Hotel, Harar, to your list of favourites.

Accommodation In The Eastern Area 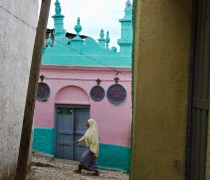